Museumplein means Museum Square, and there is a big one in Amsterdam. The square is composed of the Rijksmuseum, the Van Gogh Museum, and the Stedelijk Museum, along with the Concertbebouw concert hall. I'm ashamed to say we did not go to any museums on this visit to The Netherlands, time always eluded us. The day that we finally biked to Museumplein we got carried away walking the entire neighboring Vondelpark beforehand, and by the time we arrived it was too late to visit the museums. As I mentioned in my last post, the sun sets around 10-10:30pm, so we were always caught off guard by time, the prolonged daylight was so deceiving.

Ok, enough excuses. Bottom line is we arrived too late and decided to hang out and bike around the square instead, checking out all of the cool details on the exterior portion of the Rijksmuseum and its sculptures. There's also a great bikers passage through the Rijksmuseum itself, it allows bikers to enter the Museumplein, like a cool bicycle highway into the museum square and its park areas.  At times, the amount of bicycles whizzing back and forth through there was really intense, I wanted to stare all day.  The culture of riding bikes everywhere is something I love about this city and wish would catch on here in America more.  Granted, I've noticed it in cities here other than Miami, such as Washington, D.C., but not to the same extent as places in Europe, primarily Amsterdam.  I'm trying to get in the habit of riding my own bike more often, but mostly for leisure since getting anywhere in Miami's climate on a bike would mean arriving a hot sweaty mess...

This is on the way to Museumplein, we were walking over from Vondelpark after spending many hours exploring...

My brother and I like to rationalize and justify our bad time management and subsequent failure to visit the museums with the phrase "Everything happens for a reason!" I have to agree with him, because if we had made it into the museums on time, we would have missed out on one of the greatest moments of my brother's life…

As soon as we passed the Van Gogh museum in disappointment, we headed towards the Museumplein park and Rijks Museum and we happened upon a big metal column on the next street corner. The column was full of event posters and the biggest one was showcasing a DJ's upcoming performance at a local club in Amsterdam. The DJ just happened to me my brother's all time favorite DJ Kaskade, and the upcoming show at the nearby club was that very night!

My brother is an electronic music fanatic, he goes to a lot of local shows, including the world famous Ultra, which takes place here in Miami.  There's also an Ultra Europe, which just took place this past weekend on July 11th, 12th, and 13th. My brother and I talked about extending our trip a week or two so we could go, but it turned into a major added expense and didn't pan out. Anyway, like I said, my brother goes to a bunch of electronic music festivals and has always admired this DJ from afar. He says he has tried many times to go see him in a more intimate club setting when he does shows on Miami Beach, but it's impossible because they always sell out immediately.

So, my brother sees this poster as we are walking through Museumplein and he walks up to it in surprise, then turns to me and starts to literally gush about how much he loves the DJ's music and how we MUST find the club that night and go to his show...

As you can imagine, what happened next is pretty unreal and almost turned him into a babbling mess. I still think about it and can't believe it actually happened, so I'm sure he can't either. In fact, had it not been for me (who was understandably less star-struck than my brother) offering to take a picture, it could have very likely gone undocumented since it all happened so fast…

You see, as my brother was raving about this DJ and looking at the details on the poster, I turn to start taking pictures of the Museumplein and notice a couple guys on bikes that have stopped close behind us and seem to be watching us. One of the men had a fancy camera and I paused for a moment to wonder and then kept doing my thing. Well, as I'm taking my pictures I hear one of the guys say to my brother "You like that DJ?" and my brother says something along the lines of "Do I like him? He is the best, he is my favorite!" and the guy says "Ehh, he's alright…", to which my brother responds something like "No way, he is the best!" At that point I'm wondering what the hell is going on, when the guy suddenly blurts "That DJ is me." My brother did a triple take in disbelief and then freaked out. They shook hands and I offered to take their picture. My brother told him all about how we had just found the poster and wanted to find the club and see his show that night, he laughed and said that he'd been watching it all play out with his photographer right before we turned and noticed them.

What's cool is that he decided to approach us and talk to my brother, letting him know who he was wasn't something he had to do. He told us that he had just arrived earlier that day with his crew and they had rented bikes to ride around for a bit and explore the city before his show. When we asked if he knew where the club was, he laughed and said he had no idea. How silly of us huh, he's too famous to know that! ;)

What are the chances right?? We were floored. Not only did we happen to be in Amsterdam for the show, but we were in the right place at the right time and got to meet DJ Kaskade randomly on the street. Everything really does happen for a reason!

That's DJ Kaskade (Ryan Raddon) and my brother, who was looking like a total tourist might I add. Hahahaha, the moment took us both by total surprise and made his day, trip, life? Probably all three. I was super happy for him, he will never forget that day. Thank you DJ Kaskade, for making my brother so happy!

By the way, those orange balls hanging around my brother's neck (ahem! lol) are called Contact Poi and he bought them in Amsterdam. He had already gotten into Poi before going on the trip, he has a set that light up, however he went nuts when he found a circus store on the streets of Amsterdam that sold a bunch of these different things. He purchased these because he had yet to get a set of Contact Poi (which is a unique type), and figured what better place than on vacation in Amsterdam? So yes, he had a lot of triumphs on our trip. I had to walk the streets with him next to me spinning those things for practically the entire trip, either that or he had them hanging around his neck like above, suffice it to say he (and we) got a lot of curious and strange looks. Hahahaha!

There go DJ Kaskade and his cameraman biking off in the Museumplein:

It took us a while to come down off of that crazy unreal moment… Heck, I bet my brother is still shocked when he thinks about it. After Kaskade rode off we continued walking around, in a daze.  My brother practiced his Contact Poi for a while on the vivid green lawn sprawling between the museums:

I sat and watched the amazing show going on in the sky over the Van Gogh Museum:

This is one of the most famous sights in the museum square, it's the Rijksmuseum and the famous "I amsterdam" sculpture. People love to pose on and in front of this sculpture, you may remember seeing one in my post on Vondelpark.  There are several throughout the city, it's a trend that caught on after "I amsterdam" was created by communications agency KesselsKramer as the city motto and marketing campaign. I have some pictures with it from my vacation a few years ago, this time around I only took this one from afar:

Oh, and this one of my brother and his obsession…  Aaaand a bunch of people climbing all over it and making funny poses, like that lady in black and purple who seems to be bucking her hips!  Maybe she had just left a Coffeeshop? Who knows :)

There's my brother as we are approaching the bicycle path entrance that I mentioned earlier, the one that runs throughout the Rijksmuseum:

We fell in love with the sign mounted over the tunnel, which was flashing every now and then in green neon lights:

Indeed, art IS therapy!!!  When I sit for hours and paint, draw, or create things I always feel like it's therapeutic - like a thinking and meditation session.

This is the view out from inside the bicycle passage, what you would see if you were biking in from the front of the museum to the back:

The sky was great that day, full of those little rocketeers that leave trails in the sky.  I don't know what they are, or what their purpose is (should I?  Well I'm too lazy to look it up right now), but there were tons of them in the sky all day long in every European city we visited.  European rocketeers having a field day:

THe back of the Rijksmuseum has a pretty garden area and arched passageways with a few sculptures...

After the sun sank below the buildings we took off walking in search of the club where my brother's favorite DJ happened to be playing that night.  We found it, and we went to the show later that night, we even got a super close spot next to the DJ booth.  The music was powerful and the club was packed, it was fantastic!  I'll be back with a post on that later…

(All images in this post are the original photographs of the author of this blog. Do not copy or reuse any images on this site without written consent from www.InspireBohemia.com)
Labels: Amsterdam DJ's electronic music Europe museums music musicians My Travels travel 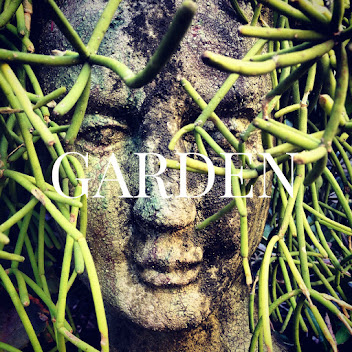